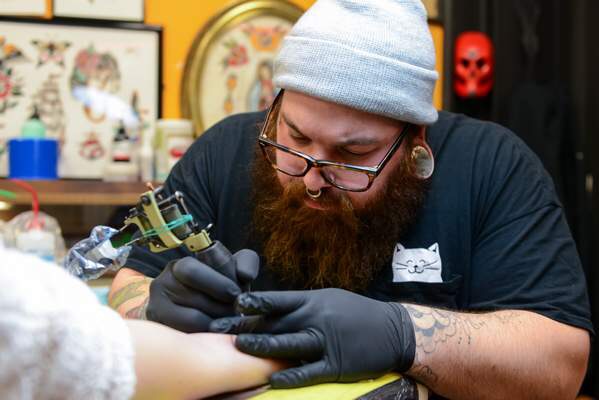 What inspired you to start tattooing?

It wasn’t just one thing that inspired me to start tattooing, more like a series of events in my life unfolded that brought me to it. I was playing football in college when an injury took me off the field. Shortly after, I dropped out of college. I used my spare time to start drawing and then I started to experiment with wood burning.

But when I was given the opportunity to tattoo in a shop, that was what inspired me to start.

Tell us a little about your football career. How did leaving football bring you to art?

Through the better part of high school I played sports and took art classes. For my first job, I worked as a henna tattooer at Six Flags in Jackson, New Jersey. As football became more serious, I stopped taking art classes. Football became more important and I went on to college to play in a small Division III school in Pennsylvania. Once I got hurt and stopped playing football, I had a lot more time to do other things that I was interested in, and that included drawing. After I dropped out of classes, I stopped in a shop that I passed on my commute to school to get some work done. This is where I met Harry Nicholas, the owner of Harry’s Tattoos in Boyertown, Pennsylvania. I told him about myself and how I wanted to learn to tattoo and he said that if I dropped out of school that he would teach me. Give me something I could work hard at. And that was when I began my apprenticeship.

What’s your favorite thing about being a tattoo artist?

My favorite thing about being a tattoo artist is being able to work with people, to take their ideas and make a tattoo out of it. Also, being able to create art that you would want people to get tattooed. I also enjoy working around creative people.

Explain your tattooing style. What is it about the American Traditional Tattooing that catches your eye?

My style of tattooing would be on the traditional side. They’re easy to read, when you look at them, you can tell what’s going on. The clear, concise imagery of a traditional tattoo is something that I gravitate towards when creating and designing a tattoo. But, above all, it doesn’t matter what style the customer is looking for, because I’m going to do my best to give them something they’ll be happy with forever.

If someone loves your work how can they get a tattoo from you?

If someone were interested in getting a tattoo, they can find me at Mr. Blue Sky Tattoo in Egg Harbor Township, New Jersey, but I can also be contacted via social media: Instagram @chrisrae1.

What Bee Paper products do you use most and why?

I use the Stipple paper the most. The owner of Mr. Blue Sky, Greg DiGiacinto, introduced me to it when he had me do a set of flash for the shop. It allows you to create an accurate representation of a tattoo.

Any advice for those interested in becoming a tattoo artist?

My advice would be to get an apprenticeship, work really hard each and every day, and draw. Tattooing is something that gives you what you put into it.

For more of Chris’s work checkout his Instagram @chrisrae1